Read the stories of four men who came to Waterloo to find work.

How were these men alike and how were they different from one another?

On a 3 X 5 card, draw a picture of each of these four people.

Then draw a picture representing or symbolizing the kind of work each started in Waterloo.

Place your pictures on a timeline that illustrates the sequence in which they lived and worked in Waterloo. Add to your timeline important dates found in this material concerning each person. 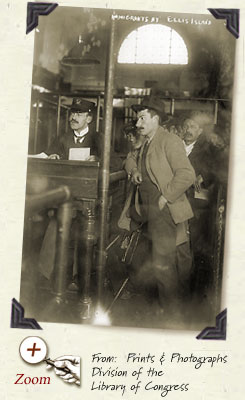 At the time of this interview Cliff Smith was living in Waterloo, Iowa.
He was born in Carbon, Kentucky January 6, 1902. He moved with his family to Waterloo in 1911. His father was a carpenter by trade but he came to Waterloo to work on the railroad. Educational opportunity was one of the chief reasons the Smith family moved north to Iowa.

The prejudice in the South at that time was intense. African American children were not generally allowed to go to school with white children. In this regard Mr. Smith said, “I lived across the street from the only white school in that town and when the teacher was sick, my mother would go over there and substitute for the teacher, but we couldn't go to school. So my oldest sister went twenty-five miles to the county seat to school everyday.”

Following grade school and high school, Mr. Smith attended Howard University for three years before attending Morningside College in Sioux City. As a young man, Mr. Smith was a concert organist. He said, “I did nothing but concert work and I played at theaters. I am the first person that ever played the Paramont Theater organ. I played at the old Plaza Theater once here in Waterloo. Then as a youngster I traveled. I played at Louisville, Dayton, Washington, D.C. and Columbus, Ohio.”

Mr. Smith said he was always able to get work during the Depression. He managed the Elks Club 290 and Sunnyside Country Club. Of his experience during the Depression he said, "In those days it was very rough for people . . . I was very fortunate. . . my father always had a job. But people suffered a lot. Malnutrition, doctors would come to your house and say 'Well the child needs food.' But you know, I never run into anything so terrible in the Depression personally. . . We were always able to have a job. So we got along all right.”

Mr. Smith didn't feel that the Depression affected African American people any differently than white people. He said, “Everybody was having a hard time. African American people were not hurt any worse than anyone else. Everybody was suffering from it. Lack of food, lack of clothing, lack of homes, run-down property... everybody suffered from it. Today when I look at the houses on this street and the houses on Sumner Street where I live, the property today is better than it was fifty years ago, when it was owned by white people. Because the people now, African American people, are making a little money. They keep their homes up and in those days it was not possible for anyone hardly to keep their homes up.”

Mr. Smith started his own restaurant as a result of the segregation in Waterloo's restaurants. He said, ". . . There was one restaurant downtown. All the [African American] kids that worked downtown went to this segregated place. They had to go in the back door and go in the basement I went down there one day and I saw all of those people down there and I said, 'What are all of you guys doing down here?' I said, 'If I was in Mississippi I wouldn't mind going in the back door, but that's policy. But in Iowa, never!' So I came over there and bought that deli over there and started me a restaurant.”

Mr. Smith felt there were some good effects which came from the Depression. He concluded, “Well it taught people how to live when they didn't have. I am telling you that. Depression wouldn't worry me anymore, but I feel sorry for other people. That was one of the fortunate things about [African American] people. We have learned to stand hard times, so we have been very fortunate.”

Nicholas Sulentic, founder of Waterloo Industries, came to America at age 15 from Yugoslovia. After landing in New York, and being taken in by a family in Illinois, he eventually moved to Waterloo, Iowa.

In Waterloo, Nicholas and his brother Pete started a grocery store in a small wooden building that had formerly been a garage. The business was so successful that the Sulentic brothers built a newer brick building starting Waterloo’s first supermarket and bakery.

Then in 1922, they built a shed behind their supermarket. In the shed they produced an automotive service tool invented by Nicholas. This new tool was called a valve spring compressor.

In those days, the valves of a car engine had to be ground about every 5,000 miles because of carbon buildup. The new invention enabled the engine mechanic to compress the valve springs for replacement in the engine block after the valve grinding job was complete. Nicholas and his wife Anna raised six boys, all of whom would eventually play a role in building the family business.

The following information is based upon a transcribed letter written about Henry Nauman and his sweetheart. Henry Nauman came to Waterloo in 1855 from Hessen, Germany, leaving behind his family and friends, among them Rosina Hiller, his sweetheart. 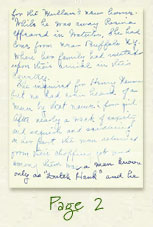 He came to America to seek his fortune. He planned to send for Rosina after he was established in a job. He also planned to marry Rosina just as soon as she arrived.

First he found work with a farmer named Charlie Mullan. He helped with the farm chores and other jobs that needed to be done. In June of 1859 he was sent to the Big Woods in Bremer County to cut timber for the Mullan’s new home. While he was away Rosina arrived in Waterloo. At that time there were no telephones and letters took a long time to arrive. So Rosina had no way to tell Henry that she was coming very soon. She came to Waterloo through Buffalo, New York where her family settled when they arrived in America. When she arrived in Waterloo, she asked for Henry Nauman. No one had heard of him. How do you think she felt then? After nearly a week of anxiety, anguish and searching on her part, the men returned from their timber cutting. Among them was a man known only as “Dutch Hank”. She knew him as Henry Nauman.

They were married in the Mullan home and continued to live with the Mullans until Henry could build a home of their own. Because they were good friends, they built their house close to the Mullans.

Mr. Beck came to this city in 1856 and at once engaged with the firm of Hosford and Miller, then operating a saw mill with a number of other interests. He continued in this George P. Beck, Sr. was born in Bavaria on Jan. 20, 1833. In 1837, when he was just four years old, his family emigrated to America. They landed at Baltimore on June 7, 1837. His father found work helping to build the James River canal in Virginia. This was the first canal ever built in this country. George and Albertina moved to Waterloo in 1856. At first he was employed at the Hosford and Miller Saw Mill. Three years later he was able to start his own saw mill. At the same time he partnered with Mr. D. Kruse in the boot and shoe business. Now he had two businesses.

Soon he met Henry and John Nauman. In December of 1864, they formed a company named Beck, Nauman & Bro. They expanded the saw milling business to produce windows and other wood products for the home and business. Later the business would be called the Nauman Company. It became one of the best known sash and window companies in the country. He invested in real estate as well and owned both business and residential property. George P. Beck, Sr., a former pioneer, came to become one of the leading businessmen in Waterloo.